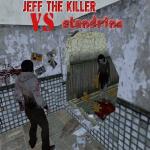 Jeff The Killer Vs Slendrina

Jeff the Killer vs. Slendrina the haunted action game on ABCya 3, the leading gaming site. The battle between 2 evils takes place, who is the winner, action role-playing game. The HTML5 platform game is compatible with smartphones and desktop computers.

Jeff the Killer vs. Slendrina pits two nasty and heinous characters against one other in an epic third-person shooter fight. You can take on the role of either Jeff the murderer or the terrifying and evil Slendrina. As you play, move around the map and look for the many hidden things. You must fight not just the other famous character, but also the numerous monsters and animals that you meet. Who will triumph in the last struggle against evil?

In addition, we also introduce to players the same action games with this game like Masked Forces: Dark Forest. You will expand your favorite game world with your countless new games on different topics.

W A S D to Move Mouse to Look Around To fire, use the left mouse button; to aim, use the right mouse button; and to switch weapons, use the mouse wheel. Grenades are abbreviated as G. F to Pickup Items, R to Reload Left Shift to Run, Left CTRL to Crouch, X to Prone, V to Melee, and Space to Jump.